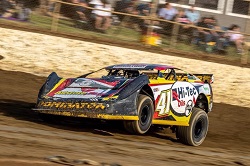 Our season is run and done and the winner of the 2019/20 Pedders Suspension & Brakes, Tasmanian Super Sedan Series is Adam Beechey!

Beechey was the form driver right from the get go when he took the win in Round One at Latrobe! Beechey led home Steve Latham in 2nd, and Corey Smith in 3rd.

Steve Latham was able to turn the tables on Adam Beechey in Round Two at Carrick, taking the win following a brilliant outside pass. Beechey would hold on for 2nd, ahead of David Nichols in 3rd.

The State series took a back seat as the Super Sedans headed to Hobart for the first time in the season for the Tasmanian Title. David Nichols won his 8th Tasmanian Title following a last corner pass on Adam Beechey. Gil Aylett was home in 3rd.

Round Three was doubled as the prestigious Geoff Stagg Memorial at Carrick on Boxing Day. David Nichols was again victorious, greeting the Chequers ahead of Steve Latham in 2nd, and Dwaine Sonners in 3rd.

Just three days later we headed to Latrobe for Round Four. Adam Beechey took the win in his brand new Dominator Chassis, ahead of Steve Latham in 2nd, and Gil Aylett in 3rd.

The State Series again took a back seat, this time for the epic Tasmanian Super Sedan Month of Madness! We had 31 of the best Super Sedan drivers in the country vying for the Richest Sedan race in Australia. Matty Pascoe was dominant taking the win from former Tasmanian Darren Kane, and our own Steve Latham was 3rd.

After the Super Sedan Stampede at Carrick was unfortunately washed out, we headed down the Midlands to Hobart for the Grand National. Matty Pascoe was again far too good for the competition, picking up another win, ahead of Mick Nicola Snr in 2nd and again Steve Latham in 3rd.

The State series was back on the agenda as we returned to Carrick for Round Five! Steve Latham took out his second round win of the season, ahead of Adam Beechey in 2nd, and Leon Cleary in 3rd.

The 6th and in the end final round was held at Latrobe. Adam Beechey landed the decisive blow with Steve Latham away on the mainland, taking the feature and series win! David Nichols came home in 2nd, ahead of Robbie Bird in 3rd.

We cant thank all our valued sponsors enough for their support throughout a great season!

We are looking forward to seeing you all back on track next season. In the meantime, stay safe, stay healthy, and we will see you soon!