What A Field for QLD Modified Sedan Title 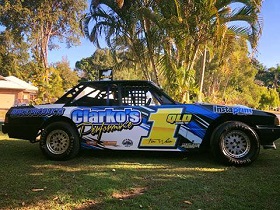 Close to 50 drivers have nominated for the 2020 Queensland Title. Defending champion Tim Weir will face an impressive field of drivers including Australian Champion Kye Walters from Victoria, along with newly crowned New South Wales Champion Aidan Raymont who is in absolutely stunning form and has previously won a bag of races in Toowoomba including a National Title.

Modified Sedans will contest three rounds of heats on Friday night and then another two rounds of heats and all the features on Saturday night. The Queensland Title doubles as Round 5 of the Steering & Suspension Warehouse Toowoomba Club Championship Series so there is lots to play for when all these drivers hit the high banks this weekend.