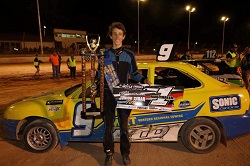 Baker only hit the lead for the first time on lap twenty three with Brandon Buszan leading from the opening lap until a restart with four laps to go brought him back to the field.

The final round of heats for the 2019/2020 SSA National Junior Sedan Title was a elbows out affair in front of a great Sunday Night crowd.

Heat Twenty was the pick of the bunch with Blake Iwanow collecting the thirty six points to go through the weekend undefeated in heat race competition.

The new format for SSA National Titles was used for the first time this weekend which saw two B Mains contested.

Victorian Zoe Young was a unfortunate retirement from the first B Main with a flat tyre while Riley Hanson stormed home to finish second after starting in position twelve.

Joshua Ahearn, Riley Hanson, Aiden Doak, Bryden Southwell, Elysha Cooper and Victorian Jye Irving all made their way into the show for the twenty five lap A Main.

Darryl George who qualified fourteenth for the A Main elected to use a substitute for the race which saw him start from the back of the field.

When the lights went green in the A Main for the SSA National Junior Sedan Title, Brandon Buszan jumped from the second row to hit the lead on the back straight with Brody Day holding onto second place.

The yellows came on for a multi car incident which saw Jhy Pack retire from the race with a flat right rear tyre.

Blake Iwanow slipped back to third in the early going with Mitchell Baker, Beau Oldfield and Drew Flatman enjoying a great battle for the minor placings.

Buszan set down the fastest lap time of the weekend on lap six with a 21.152 which saw him move well away from the field as Day and Iwanow continued their battle for second.

Baker moved to third as Buszan lead increased to over five seconds over Day.

Buszan was on his way to victory when the yellow lights came on for Taj Vanzetti when he brought the Daihatsu Charade to a stop on the top side of the track with four laps to go.

The crowd on hand was at fever pitch when Buszan lead them to the line for the restart with Day and Baker trying to find a way past.

Day and Buszan raced side by side pass the line with three laps to go with the two getting tangled up allowing Mitchell Baker to swoop down underneath.

The top half dozen raced two and three wide as Baker cleared away by over a second to record a historic victory in the SSA National Junior Sedan Title.

Drew Flatman pinched second on the line from Brody Day, Kurtis Blackburn and the luckless Brandon Buszan who fell to fifth in the concluding stages.

Iwanow slowed on the final lap to eventually finish eleventh with Baker celebrating with a roof dance in front of a very appreciative crowd.

Mitchell Baker became just the fourth Western Australian to win the SSA National Junior Sedan Title and the first member from the Geraldton club to claim victory in a National Speedway Title.