Iwanow Undefeated After Night One In Collie 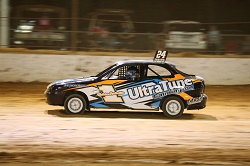 Iwanow was all class as he went to victory lane on three occasions with Geraldtons Mitchell Baker and Brandon Buszan enjoying a great night.

Fifty One competitors were on track for the grand parade prior to the fifteen heats with the opening race seeing a great win by Mitchell Baker.

Local Collie driver Seth Hinsey had the biggest incident of the night when he rolled heavily in turn two in heat two. Hinsey was unhurt with the team attempting to have the car back for night two with Erin Fraser proving to be an emotional winner of the race.

Mooras Taj Vanzetti claimed the victory in heat three aboard his Daihatsu Charade ahead of Joshua Ahearn and Broomes Cody Mackellar.

Brandon Buszan was outstanding in the fourth heat with Darryl George, Jhy Pack and Matthew Thomson enjoying a great battle for the minor placings.

Victorian Jye Irving went from last to first on the opening lap of heat five with Blake Iwanow and Irving racing side by side for the lead for a number of laps. Iwanow eventually got the better of Irving with Rory Elsum-Beaumont third.

The opening heat of the second round witnessed a great battle between Darryl George & Beau Oldfield with George getting the victory by 0.139.

Narrogins Brody Day scored the victory in heat seven ahead of Karrathas Jared Coutts and the consistent Rory Elsum-Beaumont. Hayden Mortimer unfortunately got caught up in a multi car pile p during the race seeing the Bernies Carpets Hyundai Excel heading to the infield.

Heat Eight saw a great battle throughout with Kurtis Blackburn clearing away from the field late in the race ahead of Jonty Barnsby and the impressive Mitchell Baker.

The final heat of the second round saw another win to Iwanow who withstood the challenges of Brandon Buszan for the eight laps.

The Redline Rollcages Mitsubishi Lancer of Beau Oldfield took out heat thirteen ahead of Brody Day and Cody Mackellar with the penultimate heat going to Blake Iwanow to remain undefeated.

Drew Flatman stormed to the lead early on in the final heat with Brandon Buszan and Bryden Southwell having a great battle for second place.

Racing will get underway from 6pm tomorrow night at the Make Smoking History Collie Speedway for the final night of the 2019/2020 Moyle Engines & Race Parts SSA National Junior Sedan Title.