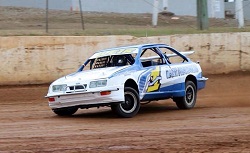 What speedway class has 9 different manufacturers represented? The answer is National 4s.

This weekend the National 4s return to the Bundaberg Motorplex ( AKA Carina Speedway) to battle it out for the right to display Q1 on the car.

If you come to the event you will see drivers ranging in age from teenagers through to seasoned campaigners racing alongside, front wheel drives vs rear wheel drives, make vs make, old cars vs new. This is at the heart of National 4s, diversity.

Last year Tim Weir retained the trophy after a great 40 lap feature that had only one stoppage. Tim will be looking to make it 3 Titles in a row in the fire breathing Ford Sierra, but the rest of the field will be out to take the top step.

Those who have been following the National 4s will know Hayden Turner has stepped up in results this year, with a strong win at Gympie to close out 2019 and is looking fast in his ex Junior Sedan Corolla now fitted with a Toyota 2 litre Twin Cam.

Experienced campaigner Frank Packer will certainly be one to watch, returning from a successfull Campaign in the United States driving Dirt Modifieds and coming off a feature win in Bundaberg last month and will looking to do one better than his 2nd place result last year.

Previous title holders Justin Weir and Rodney Midolo will be looking for a good result and expect to see them near the pointy end. Brock Hancock is fast, taking a feature win recently at Gatton and will no doubt be at the pointy end of the field

Jack Kay is making a return after rebuilding the Toyota Altezza and is sure to provide some highlights in a very quick car. The Honda charge will include Darryl Oliver, Harrison Chown, Brodie King, Gary Harris and Darren Brumpton in the new car for the Brumpton Team. It’s great to see Brodie King make the trip from NSW as he is always competitive at State Title events.

Nissan flags will be flying for Andrew Pickering, Matt Bielby, Frank Packer, Brayden Mooney and Bevan Burton. Seasoned campaigners, Bevan Burton and Graham Dawson have combined their powers to present the Nissan Pintara. Brayden has shown plenty of pace during the season in his SR20 Pulsar. Matt Bielby is coming back from an engine rebuild and will be hoping for a solid run, and to do one better than his Q2 in 2017. Andrew Pickering has proven to be a contender at many National 4s events this season and stood on the podium in 3rd position at last year’s event.

For some of our competitors, this will be their first National 4s Title and we hope they enjoy the experience and come away with a good result. This includes: Brock Morris, Kory Jennings, Ex Junior Sedan driver Ryan Shultz, Jordan Schultz and Graham Pitchfork. These new young guns will make for interesting racing. Graham is new to the category, hailing from Rockhampton club, and we look forward to seeing how he goes in the Mitsubishi Scorpion.

Three Ford Escorts will be racing this event hoping to wind the clock back to the seventies. Watch out for Justin Weir, Clinton Lawrence, and Mark Littlehales. The Ford Focus of Wayne Peterson has been recently converted to rear wheel drive and has been a point of interest in the class.
Murray Brumpton and Gary Cartwright will be looking to put a Mazda on the podium. Both drivers have been long time competitors of National 4s and will be great to see them in the mix.

Al Mather’s Lancer has shown some genuine pace at the Bundaberg track, including a strong second to Frank in December.

Other SSA Classes running on the Night will include Modified Sedans and Junior Sedans.