Street Stocks National Round Up with Tamieka McClure 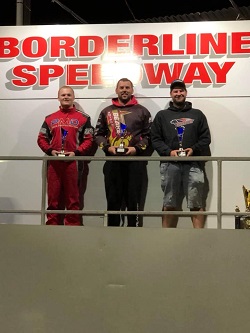 Anthony Beare again showed us all why he is the National Champion taking out pole position and the feature wins at both Hamilton and Mount Gambier.

Hamilton SSS feature started off a hot 39 degrees and the racing was just as hot on the track.

Unfortunately hot days and baking sun bring challenges to a track which showed when the track being very slick and demanding. Some prep work was done prior to the pole shuffle and we were good to go!

Front row featured Anthony Beare along side former National Champion Brad McClure. After having a great pole shuffle it was bound to be a great race. Unfortunately in said pole shuffle McClure did a gearbox and didnt make it to the green flag in the final.

After a complete restart Beare jumped in front and the action was further back for the minor placings. After Steven Gartner getting a little loose up top and having no where to go Jayden Blomeley and Scott Secombe retired infield.

The convoy then made the trip over to Borderline Speedway to much cooler conditions where last years SSN offical of the year Cary Jennings had us all organised and ready to go for a very quick and efficient race meeting with the A main being completed by 8.30pm.

Some drivers struggled with the track with some heavy hitters in McClure, Degoldi, Edwards and Jenkins being in the middle of the A main field. Whilst some drivers especially the locals in Beare and Jennings who both won their two heats obviously had no issues! Faux train was back for a run at the mount and started p3 in the final whilst another local Jason Duell was out of p4.

After the restart again Beare pulled away but the race for second place was on. This battle was an awesome one to watch and involved Stevie G, Faux, Mick Clark, Edwards, Degoldi, Duell and Bailey Heinrich.

Beare was the first to greet the flag from Stevie G in second and Jayden Edwards who podiumed for the second night in a row with another third.

Down at Solo Speedway Hobart another night of fast and close racing ensued at the Random Grid Draw Feature.

Heat 1 winner was Mat Crawford by 0.618 from Corey Bauld. Heat 2 was won by Corey Jetson whilst Heat 3 winner was Steve Russell defeating Nathan Russell by 0.175.

This is where things got a little interesting.. the 24 qualifiers then picked a number out of a hat and that is where they started in the final. So you may of qualified pole but started p15 for example. In what is a great and fun little concept the final was hard and fast racing.

The top three were Dale Riley Dale Riley Jnr, Terry Hammond and Andy Russell. Shout out Ben Riley who in his 24 car drew 24th position and finished p9 in the 12 laps.

With all drivers being fast the racing was close in the a main but Nathan Thorne was first home for the win, Nigel Reichstein 2nd and Craig Buchanan 3rd.

A small field took the track in Albany WA. All three heats were won by Peter Herbert but unfortunately he couldnt complete the clean sweep in the feature and finished in second place. The winner was Paul Bowman and in third Lincoln Coleman.