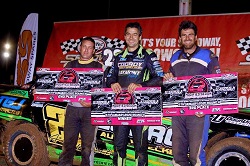 Aidan Raymont continues his hot streak to win three feature races in row this week winning the final night of the twin city challenge at Hi-Tec Oils Toowoomba Speedway that doubles as round 4 of the Steering & Suspension Warehouse Toowoomba Club Championship Series.

Mick Shelford continued his amazing form by finishing second ahead of a fast finishing Rodney Pammenter who venued to the top during the final few laps and surged on to the podium. Darren Lester finishes fourth ahead of Corey Stein, Tim Weir, Max Clarke and Nathan MacDonald who had a terrific run passing a lot of cars coming from the B-Main. Glenn Pagel and Shannon Blackburn round out the top ten.

The Modified Sedans now have a well earned week off before returning to Toowoomba for the 2020 Queensland Title on 17 & 18 January.

Thanks again to all the driver that supported these events. Its been a cool couple of weeks on the road!