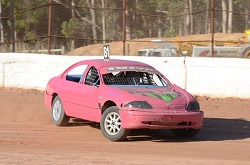 Damien Amato has stormed to victory in the annual Heidi Robinson Memorial for Street Stocks at the Trade Hire Augusta Margaret River Speedway in Western Australia on Saturday Night.

Amato made a brilliant inside pass on Clint Hadley who had lead the first seventeen laps of the A Main before Amato hit the front.

Eighteen cars faced the starter for the main event with the field scheduled to go ten laps in each direction.

Brian Jackson spun in pits corner on lap two causing the first stoppage with the red lights coming on after Brendan Fagan's Ford Falcon had a small engine fire after hitting the concrete wall in the main straight.

Margaret River's Daniel Stanley moved through the field and at one point challenged Amato for second place which allowed Hadley to get away.

The field bunched back up at the halfway point to change directions with Hadley again managing to pull a gap on the rest of the field.

Amato slowly started to reel in the leader as they closed in on lap traffic with Amato making the winning move on the exit of turn four with three laps to go.

From there Amato pulled away to record another victory in a race that means so much to everyone associated with his family.

Hadley and Stanley completed the podium with the Holden Commodore's of Joe Wilson and David Padmore completing the top five.