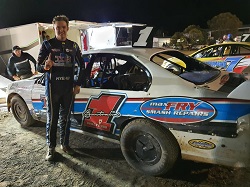 National Champion Kye Walters kept a cool head and a fast race car to claim his second round win of the season.

Luck would play against him after starting in pole position and being the True Design Homes Pole Sitter, Brock Atkins would park the HA36 on the infield with mechanical dramas while battling for the lead.

Atkins led 20 plus laps before Walters and Waters started to apply the heavy pressure from the bottom 2 steps of the podium.

Mildura's Cameron Waters brought the Travis Shore owned MDA16 home in second ahead of Andrew Blackwell in the N7.

Heat Racing saw Brock Atkins a back to back heat winner in rounds 2 and 3 with a 2nd place in heat 1.

Daniel Simpson was also the victor of back to back heat wins in Heat 1 and 2. But heat 3 for Simpson was a disaster while running inside the top 4, when a water pump plug put the V1 infield in limp home mode.

Brock Atkins hangs onto his lead after his highest points run including the DNF in the A Main. Kye Walters gains season standings ground as the reigning VMPA Champion. Brody Chrystie loses sight just slightly after missing the round with Engine dramas from the NSW Modified Sedan Title.

Next race meeting for VMPA is round 6 at Heartland Raceway Moama on February 22nd 2020.

The VMPA Tritech Lubricants Series proudly partners with the following sponsors in 2019/20: