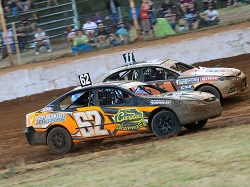 After a successful first round of the new Victorian Street Stock Series, round two takes place this
Saturday night at the South Gippsland Bullring known as Nyora Raceway. The Nyora club now have
some Nyora registered Street Stocks amongst their membership base and Eugene Bennett, Steve
Hardie and Russell Hill are amongst the line-up looking to secure a strong result on home turf.

With the winner of the first round Lenny Bates, absent due to work commitments, runner up at the
Wangaratta first round Jamie Lock now has all eyes on him as to being this weekends benchmark.
Lock will travel in to town from Bendigo and will face competition such as Jayden Blomeley, Jason
Duell who was third at Wangaratta makes the trip across from Mount Gambier, Shane Roycroft and
his wife Felicity from the Goulburn Valley, Mick Dann and Andrew Jordan from Melbournes eastern
suburbs, Jason Degoldi from Geelong, Shaun Henry from Ballarat, Warrick Howie from Victorias
North East and the earlier mentioned Russell Hill who has won more times at Nyora in his career
than the rest of the field combined.

There are some terrific race drivers in amongst this quality field. Degoldi had a cracking season last
year where he kept on winning around the state, Blomeley had a breakout season where he started
to pop up on podiums with results on a regular basis, and Dann is always a driver at the front end to
keep an eye on, he has been on more national title podiums than anybody in the list.

Eugene Bennett, Greg Parks, Andrew Burgoyne all showed that they want to be included on lists of
favouritism with their great showings in round one and consistency for these guys is key. Adrian
Lawrence missed out at the first round as did the before mentioned Dann and Andrew Jordan, watch
for these three to really get in amongst the action this weekend.

For race drivers the pits open from Midday and the drivers briefing will be at 4.00pm with racing
from 4.30pm.