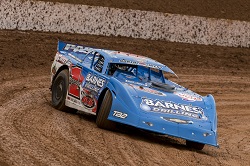 Fifteen cars were on hand for the Super Sedans first hit out for the season at the venue that has a long history of hosting major events for all classes of Speedway.

Heat Race wins earlier in the night were shared between Trent Wilson, Bob McCosker, Matt Pascoe and West Australian Gary Higgs who was debuting a brand new Sweet Chassis ahead of a big Eastern Coast Campaign.

Pascoe lead the main event from start to finish with former National Champion Darren Kane working his way through the field into the runner up position by the end of the thirty laps.

Trent Wilson rounded out the podium with Gary Higgs fourth by race end. Justin Randall who qualified on the outside of the front row aboard his Rocket Chassis retired from a strong position with six laps remaining.

Super Sedans in the Sunshine State will now turn their attention to the QLD Super Sedan Title to be held at the IBRP Kingaroy Speedway on Saturday 14th December 2019.