The Beare Is Back 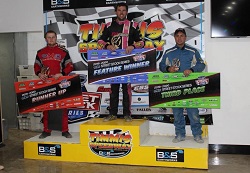 Street Stocks National Round Up with Tamieka McClure

Anthony Beare again showed us why he is number 1 with a successful win at Mildura MJS but not before a great challenge!

The MJS Series kicked off with a bang last night with round 1 held at Timmis Speedway Mildura. Check out the MJS Series Facebook page for live feeds of last nights racing along with some winner photos and interviews. MJS have managed to score a sponsor in Rockstar Energy who kept the drivers hydrated last night with some refreshing drinks!

The battle in heat 4 saw Beare get the win from Andrew Baker and Bailey Heinrich. Heat 5 Mick Clark held off a fast charging Warrick Howie by 0.412 whilst Nathan Thorne was 3rd. The final heat of the night was won by Stevie G from James Rainsford and Nigel Reichstein.

The B main battle was hard and fast with every driver wanting those last 4 spots in the A main. Andrew Jordan took the win from Jayden Blomeley and Aaron Tyler with less than a second splitting the top 3. Jo Storer was in 4th until the last corner but got pipped by Jason Gibbs.

In the A main Anthony Beare was all class even with a car that sounded pretty awful near the end. He held off a great challenge from Jayden Edwards who was poking his nose through a few times for the lead but ended up finishing 2nd and Nigel Reichstein who blew a tyre on the last turn still somehow held on for 3rd and Bailey Heinrich finished 4th.

A big mention must go to Jason Duell whilst his car looks pretty worse for wear after last night he saved the day yesterday of Jayden Blomeley. Jayden unfortunately had the draw bar of his trailer let go yesterday on his way to Mildura and Jason Duell diverted down to collect the 62 car and take it to Mildura so Jayden could race. That’s what’s so great about our class!!!

Down in Tasmania, the annual Queen of Carrick was held. Unfortunately reigning queen Brooke Ferguson was unable to make it down to contest her crown.

Heat 1 winner was Terri Farrell with Heat 2 being won by Mel Collins. Heat 3 Kayla Mckendrick took the chequered and the final heat was saw Mel Collins win her second heat race of the night.

Mel Collins continued her clean sweep of the night taking home the crown and the title of Queen of Carrick for 2019/2020. Home in 2nd was Claire Coleman and 3rd Kayla McKendrick.

Up in Bundaberg QLD, Peter Thompson came home with the win from Lynden Dunabin and Kenny Simpson.

The feature was hard and fast but in the end it was Shane Whild who got to do the victory dance from Jason Batchelor and David Fall. Paul Joss finished 4th and Joe Wilson 5th.