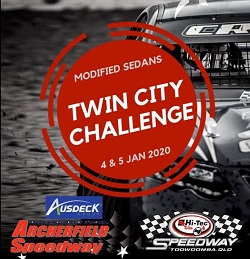 Both nights will be alongside World Series Sprintcars, which presents another wonderful opportunity to showcase the Modified Sedan division.

Both events will consist of 2 rounds of heats and a 30 lap A Main (B-main will be run if required). First round of heats will after Sprintcar Hotlaps.

Tow money - $50 paid to every driver the starts the night.

This means if you take part in both nights, you will receive $100 tow money, plus any additional prize money you win either night.

Pit Admission at both events remains unchanged - $40 with Speedway Australia license. This is the total amount payable on entry to the pits (nothing extra to pay).

The Toowoomba event doubles as Round 4 of the Steering & Suspension Warehouse Toowoomba Club Championship Series and is the final hit out in Toowoomba before the Queensland Title on 17 & 18 January (a week before the Royal).

Nominations are now open. You can nominate by messaging Ryan Harris for either or both nights.

Nominations close early (due to Christmas) on 22 December at 5pm. For those also going to Sydney and planning on running the twin city events, please nominate now. If circumstances change and you aren’t able to attend, we will revise draws at both venues on the day.

Until a major sponsor is found there will be only nightly prize and tow money paid. Stayed tuned.