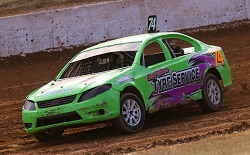 Round One of the Victorian Street Stock Series is in the record books with victory after nine gruelling heats and a forty-lap final going the way of Lenny Bates, one of Australias best Street Stock drivers ahead of Jamie Lock and South Australian traveller, Jason Duell. Twenty plus cars arrived for the battle and the fans were not disappointed with brilliant racing right through the night.

Round one heat racing began with one of Australias fan favourites Mick Dann taking a victory in front of recent Rushworth feature event winner Jamie Lock and local North East Victorian Warrick Howie. Bates then won his first race of the night by just .579 at the finish line with Jayden Blomeley in second. Recent Wangaratta feature event winner Andrew Jordan then won the third heat by an even closer margin, just .337 in front of Tum Hutchinson and Greg Parks.

Travelling all the way from Mount Gambier, Jason Duell continued the run of close margins when he took victory in heat four ahead of Lock by just .579 of a second, again Howie was in third. Wangaratta Club member Shane Roycroft then pleased all the locals when he took the win in the fifth heat ahead of Parks and Andrew Burgoyne. Hutchinson closed out the second round of racing with a .606 of a second margin between he and Brooke Ferguson and those two had a fair distance back to Bates in third between them.

The final round of racing began with the closest margin yet between first and second. Burgoyne was a winner by .207 in front of Shane Roycroft and Hutchinson who himself was only .244 behind Burgoyne, what a three-way finish that proved to be thrilling the crowd. Bates then defeated Brooke Ferguson by .736 from Duell in the eighth qualifier with the final heat race victory going to Eugene Bennett in the closest finish of the night, can you believe just .046 in front of a fast finishing Howie he in the last few laps came from fourth to second and almost pocketed a win.

With the qualifying out of the way, Bates had secured a pole position start ahead of Hutchinson, Shane Roycroft, Duell, Burgoyne, Howie, Lock, Bennett, Brooke Ferguson and Blomeley.

The forty-lap feature event with the twenty/twenty switch of direction format began with some early first lap change ups in position, Bates led Shane Roycroft, Duell, Burgoyne and Blomeley back to the first lap finish as Hutchinson shuffled back to sixth. Roycroft kept the pressure on Bates and by lap eight, he hit the front with Bates, Duell, Burgoyne and Hutchinson in tow. Bates reclaimed his lead on lap fifteen as the switching point of the race approached.

Starting the second half of the race Bates continued his lead and on lap twenty-nine, Duell passed Roycroft moving into second with Lock now in fourth and Blomeley in fifth. Roycroft moved back to second a lap later and the tremendous battle between second and third continued when Duell took second again on lap thirty-four and Roycroft again on the very next circuit. From back in fourth place, Lock though rounded up both Duell and Roycroft moving into second on lap thirty-six.

After the event the Wangaratta Speedway Club President spoke to series media representative Dean Thompson to share his thoughts. It has been a huge build up leading into the first round of the Victorian Street Stock Series for our club. It was worth every bit of it. The Street Stocks showed why they are the elite class in sedan racing in this country that they are. Our volunteers worked tirelessly, and I could not be prouder as a club President than I am now. Thank you to Justin Hampton and his team at the VSSS for their work, their promotion and their enthusiasm for the class, from Justin, his media and his announcer, they put on a great show. Everybody should get along to the next round of the series.

Lenny Bates accepted his trophy at the presentation and was delighted with winning at Wangaratta. Thank you to Justin and his people for putting the series together for us Street Stock racers and owners. To Wangaratta you all did a great job and we hope you schedule us again for club shows and features, I am sure people will come racing. Well done to the other drivers for their results and thank you to my team for all their support.

The Top Ten in Points after the First Round of the Series,

Photo of Round One winner Lenny Bates by Napier Photography.