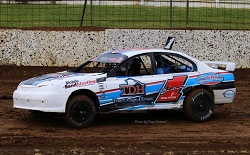 With a field full of drivers chasing a complete race program, after 2 rain depleted events, Nyora provided the redemption they were hoping for.

Heat 1A on the freshly watered track provided a show for fans in hot laps before the racing had even started. Cars doing their best to pack in the moisture on the baking sunny track.

Pole sitter, Jake Drewett, used his spot to full advantage and went on to open the book for his race program with a win. Not letting him run away easily was Brody Chrystie in the AX32. Rachel Pratt and Brock Atkins were lucky to escape damage after clipping an infield tyre also.

Heat 1B saw the battle of the ages, quite literally. Todd Atkins lined up in the pole, along side him, young Lachlan Fitzpatrick. Both drivers in their rookie season, gave eachother plenty of room, but it was Fitzpatrick to lead early. Turn 1 dramas brought Blackwell unstuck in the N7, leaving Kye Walters no track left and ran into Blackwell's door bringing on the yellows.

Matt Nelson became the Modified Sedan pinball and retired from the race early with damage. Kye Walters would go on to pass Fitzpatrick for the lead with 2 laps left to run, taking the win.

Heat 2A would see the win come right up to the finish line. Brad Wicks would very narrowly hold off Brody Chrystie and Matt Gerlach. An earlier incident with Graham West and Rachel Pratt would pile up 5 cars and inevitably retire Nick Hill and Jake Drewett.

Heat 2B was a chaotic start, a slick turn 1 plagued Brock Atkins spinning on the first restart. Walters and the rest of the field missing him by inches. A second restart was better and Felsovary got the jump in the N13. Felsovary would get the win, holding off a fast finishing Kye Walters and Brock Atkins for 3rd.

A front row of Alexandra cars greeted the green for heat 3A with Matt Nelson and Ricky Cornwall on his outside. Nelson got the jump and never looked back. Carnage invited itself a few laps in as Rachel Pratt brought the GV94 to a hault on the back straight. A number of cars banked up in behind all with cosmetic damage.

Graham West showed you don't need a new generation car to win at Nyora. West led every lap and set the fastest lap of the round. Wade McCarthy was pacey in second, but ran out of laps to make a charge.

A hectic 30 laps would follow with 5 cars retiring infield due to mechanical issues. Scott Angus, Rachel Pratt, Jeff Leahy, to name a few, coming undone. Brock Atkins would charge from position 8 on the grid up into 4th. However the top 3 would streak away, nothing separating them, would finish with Kye Walters the victor. Brody Chrystie would go one step better than his last effort in Round 2 and Brad Wicks would continue his form with a 3rd finish.

The Tritech Lubricants VMPA series heads to Alexandra Speedway for Round 4 on December 7.