Boss Wins a Thriller at T-Bar 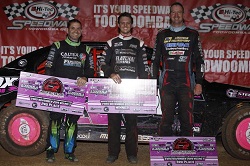 Brodie Boss has raced home to win the PS Designer Homes Pink Night shootout and Round 3 of the Steering & Suspension Warehouse Series.

A massive crowd packed into the Toowoomba venue for the annual Ultimate Pink Night. Over $8,000 was raised for the National Breast Cancer Foundation making it the most successful pink night in Toowoomba yet.

The Modified Sedan feature was hailed the race of the night after brilliant battles were seen right throughout the fields. At once stage the top five battled for the lead on both the top and bottom parts of the track.

Modified Sedans next event is the NSW Title at Valvoline Raceway on 28/30 December followed by the Twin City Shootout Brisbane (4 January) & Toowoomba (5 January).

Modified Sedans then return to Toowoomba for the Queensland Title on 17/18 January before heading to Kingaroy the following week for the eight annual running of the Kings Royal on 24-26 January.

Thanks to everyone for their support of Ultimate Pink Night and Modified Sedan racing in Toowoomba! We really appreciate it.