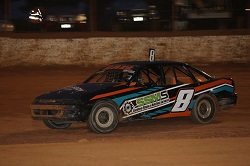 As nominations were drawing to a close the club had received 60 with the Speedway Sedans Australia divisions accounting for 35 of them.

Jason Batchelor will be looking to make it a hat trick in the Noel Pearson Memorial after claiming the 2017 (tied with Junior Hayden Mortimer) and 2018 events.

Unlike when he won it on those occasions in his familiar Production Sedan this season he will be in a Street Stock.

The local juniors will be boosted by a number of visitors including Jhy and Montana Pack, who have clean swept (Jhy) and set a new lap record (Montana) in Mt Barker this season.

Also looking to stop the siblings while resuming their battle from last meeting will be Jasmin Kennedy and Bryce Fisher.

Then when you throw in Hope Batchelor, Chesta and Bella Grinham picking a winner will be hard.

Modified Sedans with a field of nine will return to Attwell Park for a club event for the first time in a number of years.

Coby and Paul Stevens (Narrogin) and Rick Musarra (Perth) will travel down the Albany Highway to try and take the win away from the locals in Sean Theyer, Calon Ball and Bill Penn.

An exciting addition to not only the night but the division in general is the return of former state champion, Kalgoorlie's Brendan Selleck.

On paper one of the toughest divisions on the night is the Production Sedans with former State Champions Ron Belfield and Darren Blight with highly experienced former Street Stock driver Paul Colmer nominated.

Despite running at the front of the field at both Albany and Mount Barker this season, Shane Devonshire's Holden Commodore has been plagued with issues and after a extensive testing session last weekend is hopeful it's been rectified.

A healthy field of nine Street Stocks will greet the starter Saturday with Batchelor heading the list.

The division will see the return of Aaron Richardson who has repaired extensive front end damage after colliding with Mount Barkers pit gate last season.

Experienced racer David Padmore will be the lone traveller and line up with locals Brad Carroll, Lincoln Coleman, Mitchell Claybrook and more.