Time For Round Three 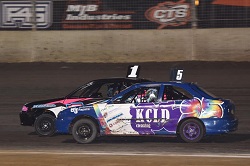 The third round of the JSRA Metro Series gets underway this Saturday night at the Perth Motorplex as drivers compete in the City of Kwinana Cup!

An almost identical field of cars have nominated for this weekend’s showdown, with only one car from the first round not running.

Heading the field is of course the WA Champion Blake Iwanow who won the opening night feature and has so far swept all before him in Junior Sedan competition this season. He also leads the Perth Motorplex Track Championship and comes into this weekend’s showdown as a red hot favourite.

Kayne Dellar did all he could to get past Iwanow at the last show but couldn’t quite pull it off, finishing second in every race. Dellar has shown that he has the speed to match it with Iwanow and with a little bit of luck, could elevate himself onto the top step of the podium this Saturday night.

Bryden Southwell finished third in all the heat races at the last Motorplex show before being credited with fifth place in the opening feature to be sitting third overall in the Track Championship. Again a competitor who has shown much car speed over recent shows, Southwell could be one to watch come feature time.

Chloe Dellar broke through for a third place finish in the last show and would love to repeat that this Saturday, while Izak Davies and Jasmine Arnold round out the Top Star fields and are hopeful of recording strong results.

Brock Lake and Olivia Earle are the sole New Stars nominated for this weekend, but after a great battle in all races at the last show, can be expected to pick up right where they left off this weekend.

It will be another great show for the division and the Junior Sedans will get three six lap heats prior to their ten lap feature, with the first race scheduled to be held at 5.30pm, so make sure you are at the track early!

Article Courtesy of the JSRA, Photo by Mel Parker