VMPA Heads to Nyora For Round Three 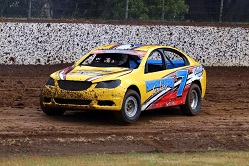 Round 2 was run and won by Hamilton's home hero, Brock Atkins, where his talented youth shone through the clouds to clinch the win in a shortened race format. This weekend however, that's all behind him.

Rain will play no part in Round 3 as drivers from all corners converge on the country Nyora Speedway. A whole host of drivers that showed true form will look to continue their charge towards the series championship. Guys like Brad Wicks just stepping into the Modifed Ranks and making his appearance known early will be working hard to keep the B17 firing hard.

Andrew Blackwell will tee off at his home track, coming off a sizeable points haul at Hamilton in Round 2.
Brothers, Jake and Dan Drewett are back in action again, travelling from Mildura for the much anticipated round at Nyora. Both boys showed good speed and diced it up with the best of them at the pointy end.

Six of Nyora's best will line up in the stout field, set to tear up their home track. Joining Blackwell, will be Ramsdale, Felsovary, Hill, Dike and Angus all chomping at the bit to keep the round 3 victory at home.

Brody Chrystie was electric in Round 2, putting on a show with some hard charging drives from deep in the field. Chrystie will for sure be one to watch, as he heads into round 3 in 3rd position on points aboard the AX32.

Catch all the action of the travelling Tritech Lubricants VMPA Series road show when it rolls into Nyora Speedway this Saturday night. November 23. Get your dirt fix Nyora.

Official Nomination List for this Saturday November 23rd at Nyora.