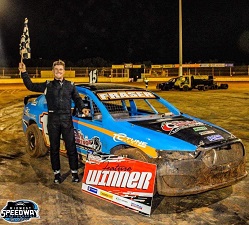 Luke Fraser has claimed Round One of the 2019 2020 Civil Hirings WA Modified Sedan Series on debut at Geraldton City Speedway last night. The event which was proudly presented by Blackman Fabrication saw nine drivers head to the Midwest venue for the opening round of this years series, including a number of first time Modified Sedan racers.

The third and final heat of the night would again see a first time heat race winner take the chequered flag, as Luke Fraser crossed the line to beat Jeff Steele and brother Branden Fraser.

Up next on the program was the all important Southern Stump and Mulching Services Shootout, to find out who would start from pole position for the twenty lap feature race later in the evening. Unfortunately, Broomes Jeff Steele would be unable to take his place in the shootout with mechanical dramas sidelining his from the remainder of the event.

Branden Fraser and Allan Mortimer would hit the track first, with Mortimer getting the upper hand. Rick Musarra would then dual it out with Mortimer, though this time it was Musarra who would progress. Ashley Baker would join Musarra for the third installment of the shootout, with a gallant Baker coming up just short. Rick Musarra, who was climbing his way up the grid then faced Adam Houston, but was unable to gain any more positions and would start the feature from position three.

In the final battle of the Southern Stump and Mulching Services Shootout, Adam Houston came up against Luke Fraser, who was having a great first hit out in his Modified Sedan. This continued as Fraser would defeat Houston to start the feature race from pole position and give him the best opportunity for the twenty lap race.

With the field set for the first twenty lap feature race of the series, Luke Fraser would make a great start and would lead away Rick Musarra and Ashley Baker who quickly worked their way passed Adam Houston.

Branden Fraser would be the first to make a challenge for a podium finish, as he applied the pressure to youngster Ashley Baker, while Bunbury duo Adam Houston and Allan Mortimer would dual it out for the minor places. Jayke Malcolm would be the first to retire from the event with a flat tyre.

Rick Musarra started to make a charge for the lead, trying to close the gap that Fraser had opened from the beginning of the race. Branden Fraser continued to pester Ashley Baker, in what was turning out to be a thrilling battle for third. Adam Houston would soon join Jayke Malcolm on the infield, retiring from the event.

Come the final lap of the race, Luke Fraser proved far too strong, leading from start to finish to take his maiden WA Modified Sedan Series feature, defeating Rick Musarra and Ashley Baker who crossed the line ahead of Branden Fraser by 0.011. Allan Mortimer would finish fifth ahead of Josh Fraser the only other finisher in the event.

The WA Modified Drivers Association must thank our valued series and shootout sponsors Civil Hirings and Southern Stump and Mulching Services for their ongoing support of the WA Modified Sedan Series, as well as Phil from Blackman Fabrication who sponsored the opening round of this years series. For all your fabrication requirements, make sure you see Phil and the team at Blackman Fabrication and tell them we sent you!

The 2019/2020 Civil Hirings WA Modified Sedan Series will next fire into action on Saturday December 14th, when the series heads to the Goldfields for Round Two at Kalgoorlie International Speedway and will be proudly supported by Cranecorp Australia.

The West Australia Modified Drivers Association would like to thank our valued 2019 2020 sponsors for their ongoing support of the WA Modified Sedan Series.