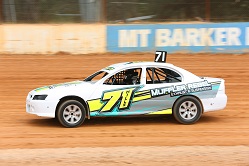 Attwell Park home of the Albany Speedway Club in Western Australias Great Southern opens the gates for the first time in the 2019-2020 season this Saturday night.

While the feature division might be the Sidecars there is plenty of action expected from the Junior Sedans, Street Stocks and Production Sedans.

With half of the eight drivers nominated in the Production Sedans either not raced before or had a number of years off it will be intriguing to see who comes out on top.

Finlay Mills returning to the sport for the first time since 2017, had her first shake down of her new car when she went to Mount Barkers opening meeting. Having started off the back all day she had great speed and will be contending for a win or two on Saturday.

Rowan Burrell will make his debut in speedway on Saturday night driving his Holden Commodore. Joining Mills and Burrell will be Clint Theyer, Dennis Sharrock as the other rookies while Shane Devonshire, Shane Davis and Rob Wolfenden will be keen to keep the newcomers behind them.

It was a lean season for the Street Stocks in 2018-2019 but are making a comeback this season with six nominated for the opening night.

Jason Batchelor has purchased a Street Stock in the off season and during practice last weekend showed he will be a contender straight away. If Mitchell Claybrook can keep the mechanical woes at bay will be in the mix and after a few years away from the sport Myra Oborne will return to the track Saturday night.

Juniors will be an intriguing affair with their field of six, Hope Batchelor and Jasmin Kennedy are the most experienced in the field and should be at the front and will be joined by the Pearce boys, Jarrod and Brock and Bryce Fisher from the Mount Barker club.

One of Hopes younger sister, Bella Batchelor will make her debut on Saturday night.