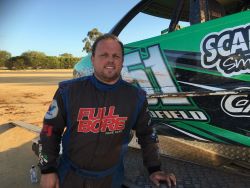 Warren Oldfield has today made a last minute decision to race worth it as he raced his way to the feature win in the Street Stock Classic at Pithara Speedway, dpoubling as round four of the SSD Gold Cup Series.

Seven cars were on hand for the days racing, with Oldfield claiming two heat wins and Damon Lyall the other, the duo sharing the front row for the twenty lap feature.

As the race began Oldfield dropped to the bottom and grabbed the lead, followed closely by Damon Lyall and Gavin Minty. Ryan Penfold then spun in turn four to bring out the yellows for the first time, bunching the field up again once more.

The race would resume much the same, all cars glued to the bottom of the racetrack as they looked to maintain position, Penfold the only one able to make any ground as he passed David Linthorne for sixth.

On lap seven third placed Minty spun down the back straight, allowing everyone but Linthorne to pass him, Minty forced to settle for sixth place and trying to chase down the rest of the pack.

By this time Oldfield and Lyall had opened up a significant gap on now third placed Josh Martinelli and despite the best efforts of all, there were no more changes in the order, Oldfield defeating Lyall, Martinelli, Chas Skipworth, Penfold, Minty and Linthorne.

Courtesy of todays results, after four rounds of the Novus Glass SSD Gold Cup Series for Street Stocks, will come down to the wire in the final round, with Gavin Minty 38 points clear of Chas Skipworth, while David Linthorne is third overall, another 21 markers behind Skipworth. Mathematically any of the top three can still win the series.

Also on the program at Pithara were Production Sedans which also attracted seven cars and Junior Sedans with four nominations. Won the Productions feature while the Junior Sedan feature was taken out byRory Elsum-Beaumont, but the biggest moment of the day was in heat three of the Production Sedans when Daniel Flavel made contact with the infield berm and rolled his brand new car heavily in turn two. He emerged unhurt and the team worked hard to get him back on track for the feature race.

The final round of the Speedway Sedan Digest Gold Cup Series for Street Stocks will be held at the Ellenbrook Speedway on Sunday 29th of September, doubling as the annual Brian Rose Memorial.