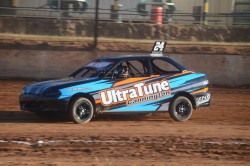 For the second time in as many years Blake Iwanow has claimed the Tom Green Memorial race for Top Star Junior Sedans while Olivia Smith has bested the rest of the field in the New Star version of the same race.

Iwanow qualified on pole for the twenty lap feature and was immediately into the lead, being pressured by Beau Oldfield, while Brandon Buszan and Kurtis Blackburn settled into third and fourth respectively.

Blackburn then went high and allowed Elysha Cooper and Mitchell Baker through, but two laps later it all came undone as Blackburn cannoned into the turn one wall. This would bring about a delay of well over an hour as Blackburn was extricated from his machine.
Upon the race resumption Iwanow maintained his lead while Buszan headed infield, seeing Oldfield into second and chasing hard while Cooper was third.

Matthew Thomson behind them was on a charge and by lap ten had passed Cooper for third.

As the laps wound down and the light dwindled, the order never changed, Iwanow crossing the line ahead of Oldfield and Thomson. Unfortunately for Thomson he was relegated after the finish, seeing Cooper officially third.

Straight after the conclusion of the Top Stars and event and in spite of the ever darkening skies, the New Stars then hit the track and despite their relative inexperience on track, did a great job and had just one stoppage in their own twenty lap affair, with all but one of the starters finishing.

Olivia Smith was strong throughout and despite some strong opposition from Tylah Steele in particular, Smith was able to race away and grab a solid win. Steele was forced to settle for second while Jasmine Kennedy came home third in an all girls podium.

Also on the program were Production Sedans with the feature going to Beau Riley over Rick Musarra and Jayke Malcolm, while the Street Stock feature, scheduled to have brothers Hayden and Ben Norman starting on the front row together, was abandoned.

The next Ellenbrook Speedway meeting will be the Production Sedan Classic on Sunday the 1st of September.