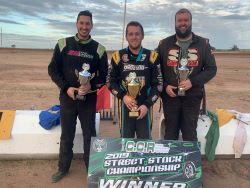 Hayden Norman has today won his fourth Street Stock Classic at Kellerberrin Speedway, defeating James Westerman and Ken Macpherson in a race that doubled as Round Three of the SSD Gold Cup Series.

Twenty one of the twenty two cars who started the day would take the green in the feature race, Evan Wakefield the only one unable to make the call after blowing an engine in the opening heat race whilst leading by a significant margin.

As the feature race went green it was Warren Oldfield who took the lead from Norman while Gavin Minty ducked underneath a number of cars for third before Damon Lyall moved around the outside to take over the position.

At the completion of lap two Oldfield and Norman were side by side, Norman going low but Oldfield then shut the door as Lyall began looking for a way through on Norman.

The yellows would come on for the first time shortly after as some back markers came together in turn four.

The restart was led away by Oldfield as all cars ran low on the track: only a lap being completed before the yellows came on again with Cody Balchin spinning on the front straight.

Norman ran inside Warren in the restart and stole the lead, beginning to pull away as Lyall started to pressure Oldfield.

Two laps later Lyall also moved under Oldfield and the two raced side by side until Oldfield managed to clear the position. Heavy lapped traffic then played its part, the lead cars forced to go high and low to pass them and Oldfield took the opportunity, taking the lead back but as that happened, some of the lapped traffic came together, Justin Hurst spinning and hitting Fiona Palmer, with Peter Walker also shooting off the track. Hurst was towed off the track while Walker shortly after would also retire with a flat tyre.

As the lap had not been complete as Oldfield retook the lead, Norman would lead the field away for the restart once again while third placed Lyall was also forced infield just before the restart with a flat tyre.

Norman led Oldfield, Gavin Minty, Ken Macpherson and a smoking Linton Dickerson away on the restart as Gareth Jacobson disappeared off the edge of the track, then two laps later Keith Fitzgerald spun in turn four to bring out the yellows at the halfway point of the race.

Fifteen cars would restart the race once more, with Oldfield blowing a tyre into turn one upon the resumption and dropping out of the race, while a lap later Gavin Minty also suffered a flat left rear tyre and half spun in front of Ken Macpherson, forcing him infield and allowing James Westerman to move into second as Macpherson rejoined the race in third.

By this point Norman was well ahead of the chasing field, just ten cars remaining all of a sudden.

Chas Skipworth then also succumbed to mechanical issues, smoke blowing from the car for a number of laps before he eventually slowed and brought on the yellows for the final time.

Norman would be ahead of Westerman, Macpherson, Daniel Sutton, Dick Hicks, Grant Hinkley, Jeremy Ferris, Steven Stewart and Fiona Palmer on the restart, and as the race went green Norman began pulling away with just a handful of laps remaining.

From here he was never headed, crossing the line ahead of Westerman and Macpherson.

With his victory, Norman is now a four time winner of the race, having won three in a row from 2015-2017, missing last years version and then returning to claim another today.

The fourth round of the SSD Gold Cup Series is scheduled for the 31st of August at Pithara Speedway.