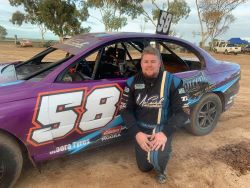 Mooras Jayden McCuish has claimed the win in what was an exciting feature race at Pithara Speedway on Saturday afternoon, for the third round of the SSD Production Sedan Four Crowns Series, doubling as the Kevan Joyce Memorial.

McCuish was all class throughout the day, winning two heats and coming second in the other to start from pole position in the main event, then holding off former WA Champion Barry Rose to lead every lap of the twenty lap feature race.

Eleven of the twelve competitors who started the day would start the feature race, with Jim McGorman the only driver unable to make the feature after throwing a rod out of the motor during his final heat.

As the race went green McCuish went straight into the lead while third place starting Rose ducked into second, as Warren Flavel, who also started on the front row, settled into third .

Unfortunately for Flavel he would then drop off the back of the track on lap three, falling to last in the standings and in the process elevating Mike Kinnear into third.

Rose would set about chasing down McCuish, sticking the nose close on a number of occasions and the two even clashing down the back straight with Rose getting up on two wheels, only to continue on.
Behind them, Hayden Norman was also making moves, picking off a car a lap to be fourth behind Kinnear.

The first and only yellow light stoppage of the race occurred on lap six as Murray Cleasby found himself stranded in turn four, but he was able to restart and was given his position back after stewards investigated.

As the race resumed again Allan Barrow would become the first retiree, while Kinnear would find himself out wide, allowing Norman and Jayke Malcolm through on lap eleven for third and fourth respectively.

McCuish and Rose would continue their battle up front, with Rose unable to make the move, McCuish going on the claim the win from Rose and an impressive Jayke Malcolm in third.

Courtesy of todays result Barry Rose now leads the SSD Four Crowns point score by fifty four markers, almost assuring him of another series win as long as he shows up for the final round at Ellenbrook Speedway. Jayke Malcolm is currently second while Mike Kinnear, Jayden McCuish and Warren Flavel round out the top five.

The final round of the series will be held at Ellenbrook Speedway on 1st of September as part of their annual Production Sedan Classic day.