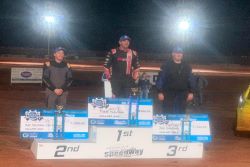 Anthony Beare has t added another trophy to his already bulging cabinet as he claimed his first career Brett Johnson Memorial win at Karrathas Nickol Bay Speedway in WAs Pilbara region on Saturday night.

It was drama right from the get go, for as the race filed out onto the track. Friday nights preliminary main third place finisher Craig Clayton turned hard right and headed infield as soon as he hit the track, something having collapsed in the car.

As the other nineteen cars got underway it was Barnewall and Beare who fought for the lead, Beare inside and Barnewall outside, Beare getting the nose in front as behind them a snarling pack of cars fought for position.

Jack McAuley moved into third place and the top three opened up a slight gap on fourth placed Matt Herbert who was holding off Shay Roberts in fifth.

Up front Beare was holding the lead by using the lowline while Barnewall was on his tail using the highline, neither losing or gaining any ground on each other.

McAuley however was gaining ground on the lead duo as Barnewall and Beare temporarily swapped lines before settling back into the groove that served them well for the first few laps.

The first yellow light of the race came on when Josh Martinelli and Stevie ODowd made contact seeing O’Dowd, the President of the Nickol Bay Speedway Club, spin. This would set up a restart with seventeen laps remaining.
The restart did not last long with fifth place Shay Roberts spinning in turn two to bring on the yellows almost immediately.

Beare and Barnewall would pick up right where they left off on the next start, battling hard but only one lap would be completed before Matt Lowes left rear tyre parted company with the car in a shower of flying parts down the front straight to bring out the cautions once again.

After the cleanup was completed the race would once again resume, this time with sixteen laps remaining. The order would remain unchanged at the front of the field for the next few laps, but behind them a number of cars were making their way through including B Main winner Justin Brumfield who was up to sixth by lap twelve.
Up front Barnewall drew alongside Beare and grabbed the lead by 0.046 seconds, then as they came back around to complete lap fourteen chaos ensued as Clint Hadley and Rowan Drysdale both headed infield and Evan Wakefield came to a stop on the track to bring out the yellows.

Upon the resumption Barnewall would lead away the field, Beare doing everything he could to get by while Matt Herbert applied the pressure to McAuley for third place.

The next lap would see Barnewall and Beare side by side and then McAuley and Herbert side by side, with Beare just retaking the lead over the line only to have the yellows come out shortlu after without the lap being complete, Peter Walker having come to a stop. This would leave Barnewall to lead away the field with eleven laps remaining.

Barnewall went high on the restart and Beare did not need a second opportunity, diving by on the inside to retake the lead with ten laps remaining.

All of a sudden Beare began to break away as Barnewall found himself under pressure from McAuley and Herbert, with Brumfield and Bradley Roberts in the same chasing pack.

Beare really opened up a gap over the next few laps, with the rest of the field fighting hard to stay in contention, with the yellows coming out again as Jake Hoath found himself sideways, Brinley McGaffin with nowhere to go with four laps remaining.

Beare and Barnewall were again away from the rest, but in the end it was all elementary as Beare raced to the win ahead of Barnewall and Herbert, while McAuley was fifth and Justin Brumfield was the Hard Charger, coming home in fifth.

A big congratulations to all the team at Nickol Bay Speedway, who not only put on another great show but also donated $5,000 to EPIC, the local kids charity. Thanks to all the travelling drivers and heres to hoping next year is even bigger and better.