Beare And Barnewall Battle At BJM 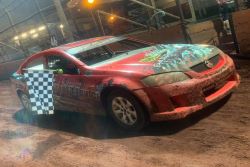 It may only be the preliminary night of action of the Brett Johnson Memorial at Karrathas Nickol Bay Speedway, but Australian Champion Anthony Beare and WA Champion Jack Barnewall held nothing back in the fifteen lap preliminary main tonight.

As high points man after night one Barnewall started on pole position for the preliminary feature race with Beare alongside him, while row two was filled by surprise packet Shay Roberts alongside Newmans Craig Clayton.

The race went green and immediately Beare shot into the lead and began to race away from Barnewall, while Clayton, incidentally the car owner of Beares machine, settled into third ahead of a very quick Jake Hoath.

Although Beare built up a good lead, Barnewall did not let him get away, clawing back the distance through the middle part of the race to be right on the tail of the leader around the halfway point.
Barnewall even showed his nose several times before diving underneath Beare, the duo side by side for a number of laps.

Beare was then abale to pull away and despite Barnewall chasing hard, was unable to make a pass, Beare racing away to claim the win, his first ever at the Nickol Bay Speedway, ahead of Barnewall and Clayton.

Impressively, thirteen of the fourteen starters finished the race and all were on the lead lap.

The preliminary feature bought the opening night to a conclusion where previously fifteen heats had been held, Barnewall officially sitting atop the points tally coming into Day Two tomorrow ahead of Beare with one round of heats to go prior to the C, B and A Mains.

Racing begins again tomorrow from around 6pm WST, with action being shared live via the Dirt Track Nutters Facebook page again, while full results are also being posted on Facebook and the website, and Race Monitor is also available.