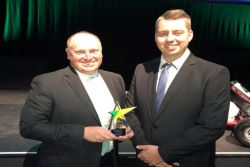 Pam and Sarah Franz were recognised for the hard word and dedication behind the scenes, formulation the online Scrutineering Tool, which has been in operation over the last two seasons at all National Titles and at some State Titles. Winning the Innovation of the year, the program continues to evolve, giving Speedway Sedans Australia valuable data to assist in rectifying issues and also growing the sport.

Allan Jennings, the National Steward for Speedway Sedans Australia was recognised as Official of the Year, something which totally took Jennings by surprise at the announcement.

Ardie Jonic, not for the first time, was recognised as the Competitor of the Year – Youth. Jonic who will retire from Junior competition at the end of the month, announced to the crowd assembled he would be moving into Production Sedans in 2019/2020.

Two days shy of his birthday, Matty Pascoe capped off another stellar season by being named as Sedan Competitor of the Year, in a year which saw the likeable Queenslander win his third National Title.

Kingaroy Speedway, a long time supporter of sedan racing were also recognised as Track of the Year.