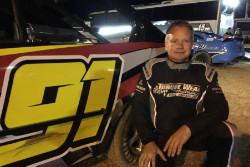 Broome local driver Jeff Steele has tonight won two from three heats in the opening day of competition in the WA Modified Sedan Title and in the process now leads the overall points score ahead of tomorrow nights final.

Steele was all class throughout the night in front of his home crowd, while fellow local and two time former WA Champion Mick Johnson also impressed to be equal second with Perth’s Branden Fraser.

The opening heat went flag to flag with Steele jumping straight into the lead and never looking back as he took the win in front of an appreciative home crowd, with Rick Musarra and Peter Fraser rounding out the top three.

Heat Two saw Ray Clifton spinning around in the first corner on the first attempt, setting up a complete restart. On the second try, Branden Fraser shot away into the lead ahead of Karrathas Jack McAuley. Behind them, Mick Johnson and Clifton touched, allowing Ian Beard Best Presented Car winner Shane Dubberlin and Steve Lockhart to close in on them. Johnson quickly settled down and set about chasing down McAuley, eventually making the pass to come home second behind Fraser and ahead of third placed Ray Clifton who also passed McAuley in the dying stages.

The third heat saw Jeff Steele leading from the front as back in the pack Rick Musarra and Craig Francis made contact, both heading infield in the following laps. Back up front though it was all Steele who went on to defeat Branden Fraser and Clifton.

Heat four saw Jack McAuley had a close moment as he half spun and was hit by Brett Mills, but both were able to continue, with Mick Johnson leading the entire distance to cross the line first ahead of Peter Fraser and McAuley.

Heat five saw a hard battle through the opening turns with cars fighting tooth and nail, but it was Musarra who came out in front while Johnson made his way into second place. Musarra and Johnson were having their own battle up front while behind them Brett Mills was just holding off Dubberlin and Lockhart. Despite a last corner lunge Johnson just came up short, Musarra holding him off by just over 0.1 seconds, while Dubberlin came home in third place.

The final heat of the night saw high points man at that point, Jeff Steele coming from the rear, but up front it was Ray Clifton who grabbed the initial lead from father son duo Peter and Branden Fraser. By lap four Steele had closed in on Peter as Branden ducked by for second, with Steele making his move on lap six. Despite harassing Branden for second Steele couldn’t make a move, with Clifton going on to score a good win from Branden Fraser and Steele.

Courtesy of his strong results, Steele leads the points after Night One with 95, just three points clear of Johnson and Fraser who are tied for second on 92 points. Ray Clifton and Rick Musarra round out the top five while defending champion Anthony King has it all to do after a disastrous defence so far with engine dramas plaguing his campaign.

Racing begins again tomorrow night from 6pm, with full results posted as they happen on the Facebook page, while Race Monitor will also be in action.