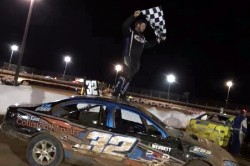 An excellent field has entered for this Saturday nights, Frontier Cement Supplies, Northern Territory Street Stock Title, to be held at the Northline Speedway, Darwin.

Defending Champion, Jason Duell, from South Australia, will have his work cut out defending his title, with the field stacked with drivers who are capable of winning the title.

Numerous West Australians from the top end of the State are also entered, ensuring a great night of racing is assured.

Nine qualifying heats will be held, along with a B Main, prior to the 30 Lap A Main.