Norman Back On Top 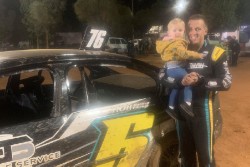 After some time away from his beloved Street Stocks in recent weeks, Hayden Norman has tonight returned to the winners circle, this time at the Moora Speedway.

Despite not winning a heat, Norman was never outside the top three in the heats and qualified himself on the front row for the feature race alongside local driver Gavin Minty who himself won two heats.
As the main race went green it was all Norman as he raced away from Minty, while behind them was a gaggle of cars fighting for position.

Norman would go on to take a strong win from Minty, with Clayton Blee able to weave his way through and survive some close moments in a pack of cars to cross the line in third.

Also on the program, the final event of the Moora season, was Production Sedans, with the feature won by Sean Bowen, while WA Junior Sedan Champion Blake Iwanow won all three of the Juniors heats then led every lap of the feature to claim yet another main event win for the season.