Walters Is The New National Champion 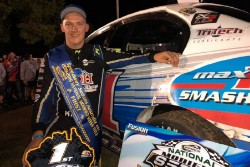 Raymont moved to second on lap four, as the trio continued the battle for the lead in a great battle as Kye Walters joined Brock Atkins in the battle for fourth.

Boss and Raymont started to move away from Waters, who then was joined by Atkins and Walters. For the next ten laps Boss and Raymont were separated by a car length in a classic race, as Boss suffered an issue with a spark plug, but Boss was not slowing down, with Aidan Raymont trying everything to pass Boss.

A stoppage on lap seventeen saw the demise of Tim Weir and Brett Barron, as the field regrouped. The stoppage allowed Walters to immediately pounce, moving to second place, as the defending champion retired on lap seventeen.

Walters ascension to the lead was complete on lap twenty one, as Boss succumbed to Aidan Raymonts continual attempts to pass in a thrilling race for the lead.

Walters had a lead of 2.108 seconds with fourteen laps remaining, while Raymont, Boss, Mark Raymont and Brock Atkins were separated by just 0.387, as the race was brought under caution for the second and final time, which saw the demise of Brody Chrystie.

On the resultant restart, Aidan Raymont did not allow Kye Walters to get away, as the pair opened a gap on the remainder of the field as Mark Raymont moved to third place at the expense of Brodie Boss.

Walters would be hounded by Raymont throughout the final ten laps, but Walters was able to hold a two car length advantage throughout, to go on and win his first National Title, after finishing second last year.

Raymont who was third last season would finish a gallant second while Mark Raymont would finish on the podium for the first time, a distant third, just ahead of Brodie Boss who did not put a foot wrong all weekend. Josh Crang, in just his second National Modified Sedan Title would finish fifth, while David Smith, who won the event in 2012 would finish sixth.

Earlier, one of the best B Mains in history was conducted with nine drivers fighting for the lead throughout the twenty lap event. Just 1.293 seconds separated the top eight, with Tim Weir passing numerous cars on the outside in the concluding stages to win from Kent Shelford, Rodney Burr and David Smith, while Adam Jorgensen and Jamie OMeara advanced to the B Main, after finishing first and second respectively in the C Main.

The event was witnessed by a near capacity crowd at the showground venue, while a new record audience watch the live streaming coverage.