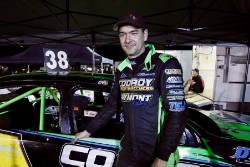 Aidan Raymont and Brodie Boss are the over night leaders of the Speedway Sedans Australia, National Modified Sedan Title at the Ian Boettcher Race Parts, Kingaroy Speedway after an extraordinary night of racing.

The night was highlighted by some brilliant racing, with three and four wide racing the norm, along with numerous spectacular rollovers which had the big crowd well and truly entertained.

Heat one of the title would title went the way of Cameron Waters who defeated Kent Menzies and Kent Shelford, after the National Champion started from position six.

Max Clarke would go up in a ball of smoke in heat two, as Rodney Pammenter defeated Brett Barron and Jason Beer, who had a great battle for the minor placings.

A great race between Jake Drewett and Bryan Galley in heat three saw Drewett just hold on by 0.260, with Ashley Parkinson storming home to finish third, with Parkinson setting the quick lap of the race.

Gary Pagel started well in heat four before breaking down while infront. Rory Evans also broke down losing fuel pressure, while Jim Cowley did a steering rack in what would be a sign of things to come. Brody Chrystie would take the win after starting from position five, with Martin Hawson finishing second, only to be relegated after the race for a pass during the event. Stephen Geritz and Peter White would fill the minor placings.

Nathan MacDonald would be the next casualty in heat five, when he detonated an engine, as David Smith went on to a big win over Mark Raymont and Glenn Pagel.

Heat six would see Hayden Stephensen suffer a flat tyre while leading on lap five, before Ben Richardson broke down in the front straight. Soon after Antony Gaunt also suffered a flat tyre in an incident riddled race, which then suffered a massive crash in the main straight, when he spun while challenging for the lead, which impacted Justin Drew, Kye Walters and Jamie OMeara. Johnno Collins would hold on to win, downing OMeara who was able to rejoin and Adam Jorgensen.

Heat seven would see Brodie Boss take a big win, but not without drama, as he hit the fence after contact as he lapped the back markers. Tony Coomber would finish second and Trent Quillerat from Tasmania would finish third.

Flat tyres riddled heat eight with Graham West, Steve Love and Clint Noakes all succumbing, while Brock Atkins would go on to record a comfortable win over Greg Worling and Michael Shelford with Atkins setting the quick lap of the race on the last lap.

A great race between Josh Crang, Aidan Raymont and Brett Baxter halted after eight laps, when Baxter rolled violently in turn four in heat nine. Raymont would go on to defeat Crang and Wade McCarthy.

National Champion, Cameron Waters, would prove too strong in heat ten, after getting the better of Jason Beer mid race. Beer would hold on for a good second placing while Rodney Burr would finish third.

Heat eleven would see a spectacular rollover with Darren Baldwin and Wayne Gilroy rolling over each other in turn one, which caused a mutli car pile up which also took Peter White and Brenton Scott and also involved Nathan Lowe and Jake Drewett. Upon the restart Brett Barron would go on to defeat Shane MacDonald and Kent Menzies, with MacDonald passing cars on the outside with some spectacular moves after starting from position six.

Martin Hawson thrashed the opposition in heat twelve after starting on the front row, winning by nearly half a lap. Gary Pagel would finish second while Greg Stevenson who started from position eight would finish third.

In one of the drives of the night, the winner of the millennium title, Ash Parkinson drove from the back of the field to win heat thirteen. Parkinson not only won, he drove away from the field as he defeated Bryan Galley and Brad Warren.

Ben Richardson rolled over violently in the main straight on lap seven, and with a medical emergency in the crowd in would be another 35 minutes before the race resumed, with Kye Walters recording a good win in the remaining laps over Tim Weir and Brodie Chrystie.

In heat fifteen, Greg Worling and Mark Raymont put on a great race for twelve laps, with nothing separating the duo, with just 0.024 separating the two in the closest finish of the night. Sean Black finished a close third.

Brett Watson would have a massive rollover in turn four on the opening lap of heat sixteen, before Glenn Pagel took the win from Adam Jorgensen and David Smith.

In arguably the best race of the night, Brodie Boss, Brock Atkins and Clint Noakes were never separated by more than 0.3 of a second for the entirety of the race, with Boss downing Atkins for the win by 0.106.

Aidan Raymont would win heat eighteen, leading all the way, but he did not have it all his own way, as Josh Crang chased hard, while Jamie OMeare finished a distant third.

The final round of heats would have numerous drivers win from the back of the field, with the first of those being Aidan Raymont who started from the back row. Raymont took the lead on lap eight, to win a thriller over Mark Raymont, David Smith, Trent Quillerat and Michael Shelford, with the five running two and three wide throughout.

In a depleted field, where only six drivers would face the starter in heat twenty, Josh Harm won another close race, with Wade McCarthy and Hayden Stephensen joining Harm in a great three way battle. Stephensen would get the better of McCarthy in the concluding stages to finish second.

Heat twenty one would see Brodie Boss win from the back of the field, but he did not just beat the field, he romped to victory, downing Brody Chrystie and Shane Langton.

Heat twenty three would see Clint Noakes come from the back of the field to win, but not after a thrilling five way battle for the lead which involved Mick Johnson, Tim Weir, Tony Coomber and Shannon Blackburn. Noakes would get the upper hand late in the race, defeating Johnson and Weir.

Brock Atkins won the heat that followed but the car overheated after the race, with Atkins too strong for Rodney Pammenter and Corey Stein.

The feel good moment of the opening night was the win by Wayne Gilroy in heat twenty five. After being involved in a spectacular roll over earlier in the night, Gilroy, despite having a car akin to something out of a demolition derby, was able to hold off Bryan Galley and Rodney Burr.

The penultimate heat of the opening night, saw not one, but two drivers lose wheels in separate incidents, with both Stephen Geritz and Luke Hollyman ending up on the grass. David Jacobi would record a strong win.

The final heat was another thriller, with Martin Hawson winning after starting from position six, with Cam Waters recovering to finish second after dropping as low as fifth in the middle stages of the race, while Sean Black finished third.

After the opening night, there are some very second hand race cars, and many drivers will be burning the midnight hours to get themselves ready for night two of the National Title, on a super fast race track. For others the memory will be of some brilliant racing that Modified Sedans are renowned for, with three and four wide racing in almost every race.

In a mouth-watering prospect, Aidan Raymont and Brodie Boss will both be in the same heat race on night two (heat thirty), while Brock Atkins will start from position seven in the heat that follows. Meanwhile, the defending Champion will start from the back of the field in the final qualifying heat of the night, which will make for an interesting pointscore at the completion of the 36 preliminaries.