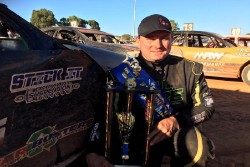 Jamie Oldfield has today made history at the Ellenbrook Speedway once again, winning his first WA Production Sedan Title and in the process becoming the first driver in WA to win both the Production and Street Stock WA Titles.

Starting out of position thirteen in the final on his home track, Oldfield was simply outstanding in a race that saw just two stoppages and four different leaders, picking off the rest of the field one by one, then holding off a spirited challenge from outgoing WA Champion Barry Rose, who had himself come from position twenty one, to claim the win.

The thirty five lap feature event saw the undefeated Beau Riley from pole, with Kane McDiarmid joining him on the front row and as the green flag flew it was McDiarmid who led from Riley while Clint Noakes was straight into third.

Noakes then moved to the highline to grab second on the line as they completed lap one, then continued powering around to grab the lead.
McDiarmid closed back in on Noakes and looked underneath but the yellows came on for former State and National Champion Ron Belfield who was sent to the rear upon the resumption.

Noakes led away on the restart as McDiarmid and Riley chased hard, former WA Champion Drew Ogle and Rod Musarra battling for fourth just behind them.

Australian Champion Berkley slowed through field with blown tyre while up front Rod Musarra found some track to work with and grabbed second on lap seven, while Drew Ogle followed him through to fight with McDiarmid for third.

Noakes had checked out in front while Musarra set out after him, with Ogle, McDiarmid, Riley and Kyle Sayer all fighting for third in a great battle.

Jamie Oldfield soon joined the battle, passing Sayer and then McDiarmid as Riley looked for a way past Ogle in third.

The yellows came out for just the second time as Jake Blight slowed and headed infield, but he was collected by Hamish Macalpine who lost his bonnet in the contact and then spun.

As the race resumed again, Rod Musarra took the opportunity to go high and challenge Noakes for the lead, the duo side by side across the line while Ogle was right behind them. Musarra then went high and was swamped, with Noakes, Ogle, Riley, McDiarmid and Oldfield all shooting by.

Straight away Ogle went high and grabbed the lead from Noakes, the two again side by side. Ogle then pulled clear and Riley grabbed second with Noakes dropping to third.

Behind them Oldfield was into fourth while Barry Rose had fought his way into fifth from the very back of the bus, ahead of McDiarmid.
Oldfield then passed Noakes for third, with Rose moved into fourth the order with fifteen to go seeing Ogle leading Riley, Oldfield, Rose, Noakes McDiarmid and Musarra.

Riley closed in on Ogle, Rose right on their tail while Oldfield followed close behind, the top four putting on a great race in incredibly close quarters. All of a sudden Ogle and Riley touched, the two allowing Rose to close in, Rose then moving to the outside and grabbing second from Riley with ten to go.

Rose then moved back to the inside and looked under Ogle, but Oldfield moved to the outside and grabbed second from Rose but was unable to quite pass Ogle, the top three very close as Riley sat right on their bumpers.

All of a sudden the cars were three wide for the lead with Rose inside, Ogle in the middle and Oldfield on the highline, Oldfield then hitting the lead with seven to go and Riley getting past Rose into third.
Oldfield would lead with six to go from Ogle, Rose and Riley, Noakes and Musarra again closing the gap just behind them.

Rose got the run all of a sudden and shot past Riley and Ogle, grabbing second, with Riley also getting under Ogle to grab third with lapped traffic also involved.

With two to go Rose closed the gap on Oldfield to just 0.5 seconds, Rose diving underneath in the final corner, the duo making contact but Oldfield held on in a thriller, just 0.2 seconds ahead.

Rose would come home second while Riley held on for third place ahead of Ogle and Musarra in what was an excellent final race.