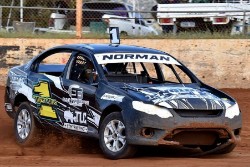 Speedway Sedans Western Australia have released the field for the upcoming WA Street Stock Title to be held at the Make Smoking History Collie Speedway, this Saturday and Sunday nights.

The field is headed by defending champion Hayden Norman who will put his title on the line against over sixty two other competitors who will be coming from right around the state to contest the event.

Victorian Corey Sandow is the lone interstate driver in the field and finished runner up to Norman in last years title held in Carnarvon.

Two time State and National Champion Jamie Oldfield should start as one of the favourites and has plenty of experience racing in Collie.

The host club has many drivers entered in the field that should be prominent including Ethan Genev, Cody Avins, Damon Thomson, Paul Joss, Brodie Dunn and former WA2 Paul Briggs.

Official Practice will be held from in the late afternoon on Friday, with the racing to get underway at 6pm both nights of competition.